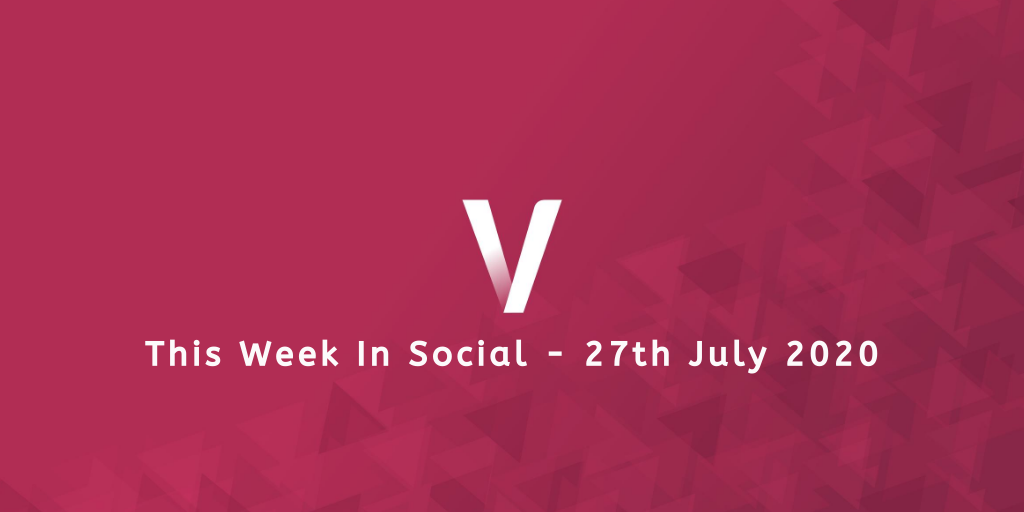 What’s happened in the world of social media in the last 7 days?

This week has seen a Twitter walk out (more on that below) and the CEO’s of Google, Facebook, Apple and Amazon face the House Judiciary Committee as to if the tech giants have been operating in an anti-competitive manner. The outcome of the hearings could enforce new regulations for tech companies, restricting the market dominance of each.

Facebook offers deals to TikTok creators ahead of Reels release. As we reported in This Week In Social a couple of week ago, Instagram is releasing their own short-form video feature to rival TikTok. Ahead of a wider release of Reels, Facebook is offering lucrative contracts to prominent TikTok stars, with a spokesperson for Instagram stating that the company have “approached a diverse range of creators about Reels in several of the countries”. It is thought those contacted to Reels will be involved in the broader release of the feature set for next month. TikTok doesn’t yet have a mature eco-system for ensuring top creators get paid for publishing content to the app, a factor which is thought to be significant in the fall of Vine (another short-form video app) in 2016. Platforms such as Facebook and YouTube will be attractive to TikTok influencers as these networks already have established creators working in partnership with them, and these associated creators are rewarded generously. So, watch this space…

Twitter users staged a boycott over the platform’s failure to address anti-Semitic content. You may have noticed #48HoursSilence trending on Twitter earlier this week, but you might not know why. Well, late last week grime-artist Wiley posted a series of anti-Semitic tweets, only a few of which were deleted by Twitter. The platform has since been criticised for not deleting all tweets and for not removing them as soon as they were posted. This social media incident has attracted the attention of big entertainment names, national organisations and even the UK government, with Boris Johnson stating “Twitter needs to do better”. Did you participate in the boycott? Let us know.

This week Twitter have also updated their Hate Speech Policy to include links to “hateful” content. As outlined by Twitter, “Twitter will take action to limit or prevent the spread of URL links to content outside Twitter. This is done by displaying a warning notice when the link is clicked or by blocking the link so that it can’t be tweeted at all”.

Microsoft has partnered with Snapchat for its new Xbox AR campaign. A new series of 12 AR Lenses will be coming to Snapchat to promote Xbox Series X next gen gaming console. This is the first time a company has launched 12 new themed lenses at once, underlining the value of Snapchat as a connective digital tool. 90% of American 13-24 year olds and 75% of those aged 13-34 can be reached by Snapchat, reportedly more than Facebook or Instagram. The Xbox lenses will not only be available on the Snapchat app, but also with the Snap Camera add on (if you fancy spicing up your video calls).

Facebook Gaming has seen a 200% year-on-year growth in Q2 2020. In May the number of hours watched in Q2 peaked at 342 million, with the overall hour watched increasing by 75%. As of June this year, Facebook gaming have seen a 200% growth in 12 months, figures which we can assume increased following the recent news that Microsoft’s Mixer has shut down. Vice President of Product for Facebook Gaming said, “With community at the heart of Facebook Gaming, and a significant driver of our growth, we’re always working to deliver the best in gaming to our audience while enhancing our platform to empower gaming creators to earn the most from their content.” Should Twitch be concerned? Let us know what you think!

Snapchat have also released a new study into evolving video consumption behaviours. The report – which was conducted by The National Research Group – revealed that 8 in 10 consumers prefer to receive their current events information in the short-form video format. According to the study, daily engagement has increased by 40% in 2020 and 73% more consumers are viewing videos on their smartphone compared to the previous 12 months. Find the full report here.